“Find the need and endeavor to meet it.” – David Ainslie Sinclair

Although his tombstone in Woodland simply states “Secretary of the YMCA”, David Sinclair did much more for Dayton and its residents. 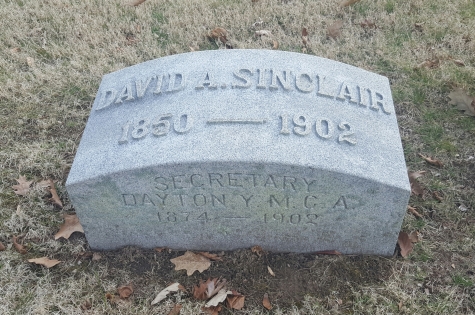 As a representative of the Hamilton, Ontario branch of the YMCA, David attended a conference, meeting with Dayton YMCA leadership. They offered him a position as Secretary in Dayton, and he accepted. After taking the position in Dayton, David noticed the high amount of jobless young men in the Dayton community. He questioned the local men and employers, asking how he can connect the two groups. The answer came back the same each time: lack of skills and knowledge were preventing these young men from finding jobs, and preventing the employers from hiring them.

Something needed to be done. The YMCA Education Department -which offered only Bible Study classes at the time – began offering more vocational training courses in the old building at Fourth and Main. Fifty-five students attended the only two courses offered: Bookkeeping and Mechanical Drawing.

Sinclair ran himself ragged campaigning for growth and funds for his project. His doctor eventually forced him to take a vacation to regain his health, but unfortunately he died while traveling to Montana in 1902. Sinclair never saw the completion of his dream, nor did he see the opening of his school’s new building in 1908.

Here are some highlights in Sinclair College’s history: