Eight years later in 1862, Pollack served as a corporal in the civilian Squirrel Hunters during the Civil War and was regarded as a hero after the Squirrel Hunters successfully defended Cincinnati from an attack by the Confederate army. At the end of the war, Pollack and his friend Rauh started to build two identical homes on West Third Street. 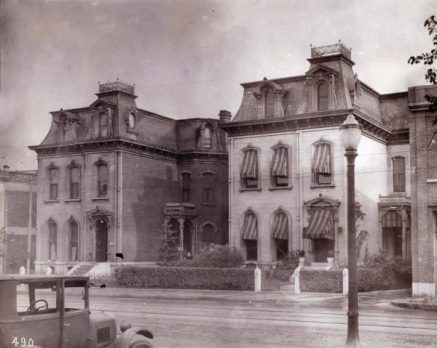 END_OF_DOCUMENT_TOKEN_TO_BE_REPLACED

“Bought lumber for making ribs and uprights from Requarth Co..” – Orville Wright in his journal, January 19, 1904 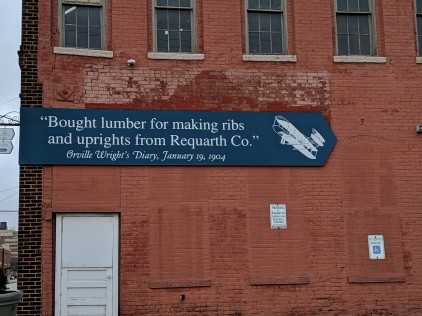 Requarth Lumber was founded by Frederick August Requarth and Henry W. Meyer in 1860 as a small turning shop at Fourth Street and Wayne Avenue. They eventually moved to 447 East Monument Avenue in 1895, and have stayed there since.

END_OF_DOCUMENT_TOKEN_TO_BE_REPLACED

Back in April we mentioned that to celebrate their 80th anniversary, Wright Library published an art and literary zine made up of poetry, short stories, essays, and art focusing on the Miami Valley, the Wright Brothers, and more.

We submitted written pieces to the zine and were both lucky enough to be selected for publication in the zine glide, which was published as both a hard copy and a digital copy. There were so many entries that an additional online zine, glide on was made available as well.

You can read our stories here:
The Man Who Sent Wilbur on the Wright Path by Sara Kaushal
The Missing Benches by Bethany Kmeid

While at the reception and open mic for the event, we had the honor of meeting Jeff Wilson, Author of Ohio Legends!

On February 14th, 1939, Wright Memorial Library opened its doors in Oakwood. In 1913, the library started in the home of a local family and in 1916 a resolution was passed to establish a public library and the library’s location moved around a few times until a bond issue was passed to build a new building on Far Hills, on the site of the Katharine Wright Park.

On the opening night of February 14th, 1939, the lights went out, which required the crowd to tour their new library by candlelight. To celebrate 80 years of service to the community and commemorate the opening night, Wright Library held a candlelight celebration with historical items on display and a telling of the story of opening night.

Here are a few highlights of the past five years:

We are so excited to see what the future holds for us!

As always, if you have any story ideas or questions you’d like us to look into, please let us know! There are so many ways to contact us – leave a comment down below, via the Contact Us page, send an email (daytonunknown@hotmail.com), send a message on Facebook or Instagram (@daytonunknown), etc..

END_OF_DOCUMENT_TOKEN_TO_BE_REPLACED

“Lots of people let it go by and never accomplish what they want. I just wanted to see what I could do.” – Edwin C. Moses

Edwin Corley Moses was born in 1955 in Dayton, Ohio. As the son of two educators, Edwin took academics seriously. In addition to being an excellent student, he was also a gifted athlete.

During high school, Edwin participated briefly in basketball and football, but soon turned to Track and Field. Edwin accepted an academic scholarship to Morehouse College, majoring in Physics and Industrial Engineering. Morehouse College did not have its own track, so Edwin practiced on nearby high school tracks. He competed mostly in 120-yard hurdles and the 440-yard dash. Edwin attributed his success at running to applying his knowledge of the mechanics of running and lots of stretching. He had a trademark technique, taking a consistent 13 steps between each hurdle instead of the usual 14, causing him to get ahead in the 2nd half of the race as his competitors changed their strides.

END_OF_DOCUMENT_TOKEN_TO_BE_REPLACED

“When I think of a place of worship, I think of a place where one can sit and be reminded of all the things that are important outside our individual lives. To express spirituality, the architect has to think of the original material of architecture, space and light.” – Richard Meier

Waldruhe Park was a gift to the city from Adam Schantz Jr., and is a gorgeous park saturated with trees. “Waldruhe” is German for “quiet forest.”