Born in 1829 to one of Centerville’s most prosperous farmers, Jesse Kelsey Sr., Jesse Kelsey Jr. was the 9th of 12 children. He married Unity Stokes on September 4th, 1856, and lived on a farm in Centerville on the southwest corner of what is now Spring Valley Pike and Dayton-Lebanon Pike, near the Kroger Marketplace. In September of 1862, Jesse Jr. and Unity were expecting their first child.

On the night of September 7th, 1862, just 3 days after celebrating their 6th wedding anniversary, Unity woke up to see a man standing over her and Jesse Jr. while they slept. She woke Jesse Jr. up, and he shouted at the man, who then fired a pistol at him. Jesse Jr. rushed Unity out of the room to safety and was struck by another pistol shot, and fell to the ground, dead.

Unity and their house girl Serelda Montgomery ran to John Allen’s farm north of Spring Valley Pike for help, and brought Aaron Robbins and Perry Reeder to the farm, along with Aaron’s brother, Samuel. The men subsequently summoned the Dayton coroner, after confirming that Jesse Jr. was dead.

Aaron and Samuel Robbins were the sons of the first mayor of Centerville, Samuel Robbins. The younger Samuel had recently returned from the Civil War, likely AWOL (Absent Without Official Leave). Witnesses stated that the day after the murder, the younger Samuel was “agitated and confused and could scarcely talk,” and that they had seen Samuel with a pistol.

When authorities confronted the younger Samuel about the witness’ statements, he insisted that he saw a man riding away from the Kelsey’s farm and he couldn’t catch him because his stirrup broke. Further digging proved that the clothing the younger Samuel was wearing matched the description that Unity Kelsey provided of the intruder.

Based on the statements and evidence, the younger Samuel Robbins was arrested, tried, and convicted of first-degree murder and hanged for his crime. The motive for this seemingly random murder remains a mystery.

The child of Jesse Jr. and Unity, Jesse Stokes Kelsey, was born September 20, just 13 days after the murder of the father he would never meet.

Jesse is buried in Sugar Creek Baptist Church Cemetery in Centerville, along with Unity. 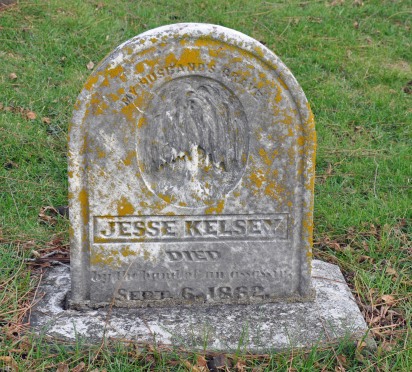 Source The gravestone of Jesse Kelsey, Jr., reads “Died by the hands of an assassin.”