Although predominately a Roman Catholic cemetery, all faiths are welcome at Calvary Cemetery. Currently it is the final resting place for roughly 75,000 people including 6,000 people exhumed and moved from the former St. Henry’s Catholic Cemetery, which was located at Main Street and Third Street.

With the Civil War, Dayton’s Cholera Epidemic, and a huge flux in Irish, German, Polish, Italian, Lithuanian, and Hungarian populations in the early-to-mid 1800s, there was an imminent need for another cemetery. Calvary was opened in 1872, and the dedication ceremony in 1874 was a grand affair. The papers described people spilling into the streets, land and water vehicles filled over capacity with people intent on celebration.

Meanwhile, St. Henry’s Church was in shambles, deteriorating more with each passing year. There were no longer caretakers for the closed cemetery, and families of the dead buried there were complaining about the terrible condition of their loved ones’ graves. 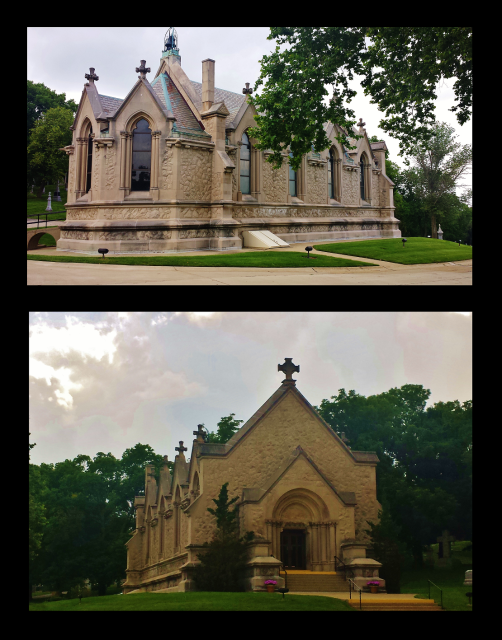 Over the course of the next 20 years, graves were slowly moved from St. Henry’s Cemetery to Calvary. Of the 6,000 in total that were moved from one to the other, only 2,000 remained claimed and recorded. Due to lack of records, old worn out stones, and family moving away, over 4,000 burials remained unclaimed. Those remains were reinterred together in a special section.

Frank Andrews, who was known for his work (NCR buildings, Conover Building, The Arcade) on Dayton buildings designed and built the chapel (pictured) for $22,000 over the remains of 4,000 unidentified people. On All Souls Day in 1902, St. Henry’s Chapel was dedicated to the memory of the unclaimed souls.

Only half of Calvary’s 200 acres is occupied today, meaning Calvary will have room for years to come.

The gate was designed by Association president John Reger. He had two main ideas in the project: curved wings as to suggest the flight of angels and the break the monotony of straight lines, and construction with as few seams as possible, for continuity and to prevent weathering.