No greater person could be featured for July 4th.

Tony lived a life of helping others. He dropped out of Kiser High School in Old North Dayton to get a job to help support his widowed mother, and younger sister. At age 19, Tony pulled a drowning boy out of Mad River, saving his life.

Although Tony’s mother tried to persuade him not to enlist in the Marines, Tony said he felt it was his duty, that he owed his country. Tony enlisted in the United States Marines just eight days before his 21st birthday.

Using his skills as a toolmaker, Tony helped to customize his own weapon. Nicknamed the “Stinger,” it was a .30 caliber M1919 machine gun salvaged from the wreckage of a Navy fighter plane. Weighing roughly 22 pounds, this gun was considered by many to be the best automatic weapon of WWII.

Tony and the Stinger. (source)

Tony certainly made good use of his gun. On February 19, 1945, Tony was the first of his troop to land on the beach at Iwo Jima, and under a barrage of fire, Tony covered his comrades coming in for a landing. When the unit came to a stalemate, Tony bravely exposed himself to enemy sight, enabling their locations to be visible as they fired upon him.

Stein with his Stinger.

To further incapacitate the Japanese, Tony attacked enemy pillboxes one by one. During this one-man assault, Tony successfully killed 20 enemy soldiers. Accounts of this event describe Tony firing mercilessly, only stopping long enough to run back to the beach and get more ammo, each trip back taking another fallen soldier with him, either by helping him back on his own, or by carrying him. He made eight trips back and forth, removing his boots and helmet to help him move faster. Later, despite the weapon literally being shot from his hands, Tony covered his platoon on the way out, returning to company position.

Four days later, Tony was wounded during the fight for Mount Suribachi, and taken to a hospital ship to recover. Upon hearing of his unit sustaining heavy casualties in battle, Tony insisted that he return at once. Injury didn’t stop Tony from leading a troop of 19 men on a reconnaissance mission to ward off a group of snipers preventing advancement of American troops, which led to his untimely death by a sniper on March 1, 1945. 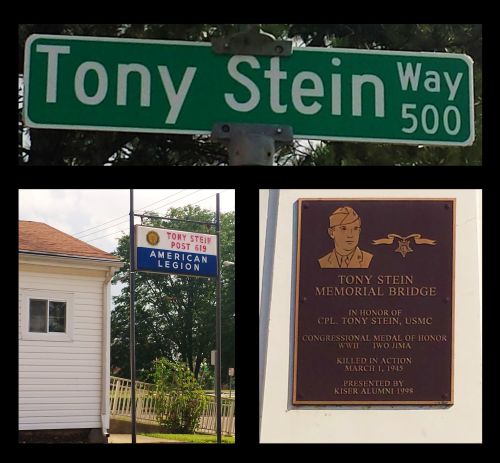 Tony was buried in the 5th Division Cemetery on Iwo Jima. On February 19, 1946, one year to the day after his brave charge at Iwo Jima, Tony’s wife received his purple heart and posthumous Congressional Medal of Honor for Conspicuous Gallantry.

Tony was later reinterred in Calvary Cemetery on December 18, 1948.

Tony’s grave in Calvary Cemetery. The grave bears a marker detailing his acts of heroism.