Who doesn’t know the Wright Brothers? Anyone that has taken a plane, or knows someone that did, has been affected by the Wright Brothers. Born in the mid 1800’s, Orville and Wilbur Wright grew up in Dayton Ohio, in a family of 7 children. 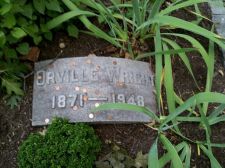 They often credited their interest in flying to their father bringing home a toy planophore, a French invention loosely resembling a modern day plane. The boys played with this toy until it broke, then built one themselves.

Giving the world the gift of flight was not the only thing they did, however:

Neither Wilbur nor Orville ever married. Wilbur once commented that he does not have time for both a wife and an airplane.

Wilbur died at 45, after contracting typhoid fever on a business trip in 1912. Orville lived until he was 76, dying after his second heart attack in 1948.

Have you ever been to Russ Nature Preserve in Beavercreek? The Playscape has this giant tube you can get in and roll!
Follow Dayton Unknown on WordPress.com
Join 1,260 other followers