January 17, 1880 was a normal day on the beat for Patrolman Lee Lynam. That morning, he arrested a man named John Francis on suspicion of having a gun. Francis was later released and told to “behave.”

But behave, he did not.

Hours later, at 12:15 PM, he tracked down Patrolman Lynam to a saloon at 109 East Third Street, shooting him in cold blood.

Patrolman Lynam had been a member of the force for about five years and was highly regarded as the one of the best men in the department. Lynam’s beat was on East Third Street, and during the course of his duties, he stopped into the saloon to speak to a man named Jackson for information. While following Jackson into the saloon, who else but Francis appears, following behind.

Francis walked in and passed Lynam, walking to the other end of the counter, which was a distance of about 10 feet. Mace Crabel, owner of the saloon and the only witness to the incident, stated that Jackson then turned to Francis, offering him a drink. As Francis neared Jackson to take the drink, closing the distance between himself and Lynam, he pulled out a gun. Lynam was leaning against the counter, with Jackson standing behind him. Francis shot Lynam, and as he was making a motion to shoot again, Jackson grabbed his arm. Francis broke free from him and threatened to shoot Jackson if he interfered again. Francis then ran through the swinging doors to the back of the saloon.

Lynam threw his arms up in the air, exclaiming “I’m shot!” He grabbed his club and started after Francis, but quickly staggered, blood rushing from his mouth and nose and he fell to the floor. Help came quickly, in the form of Private Watchman Hatfield and Officers Hughes and Grauser. Francis immediately surrendered, handing his gun over to Grauser.

John Francis received an inadequate sentence of only ten years for the murder of Patrolman Lynam. At twenty-two, he had already been a troublemaker for several years.

On the saloon floor on a cold January afternoon, forty-year-old Patrolman Lee Lynam became the first Dayton Police officer to be killed in the line of duty. He was survived by his wife, five children, parents, and his brother. He is buried in section 31, lot 83 at Woodland Cemetery. His last words were reported to be “I’m killed.” 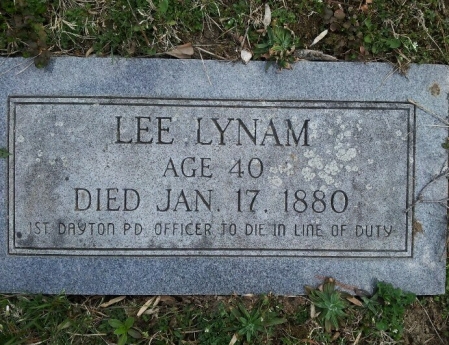